The sky of February 2021: planets, stars and everything else! 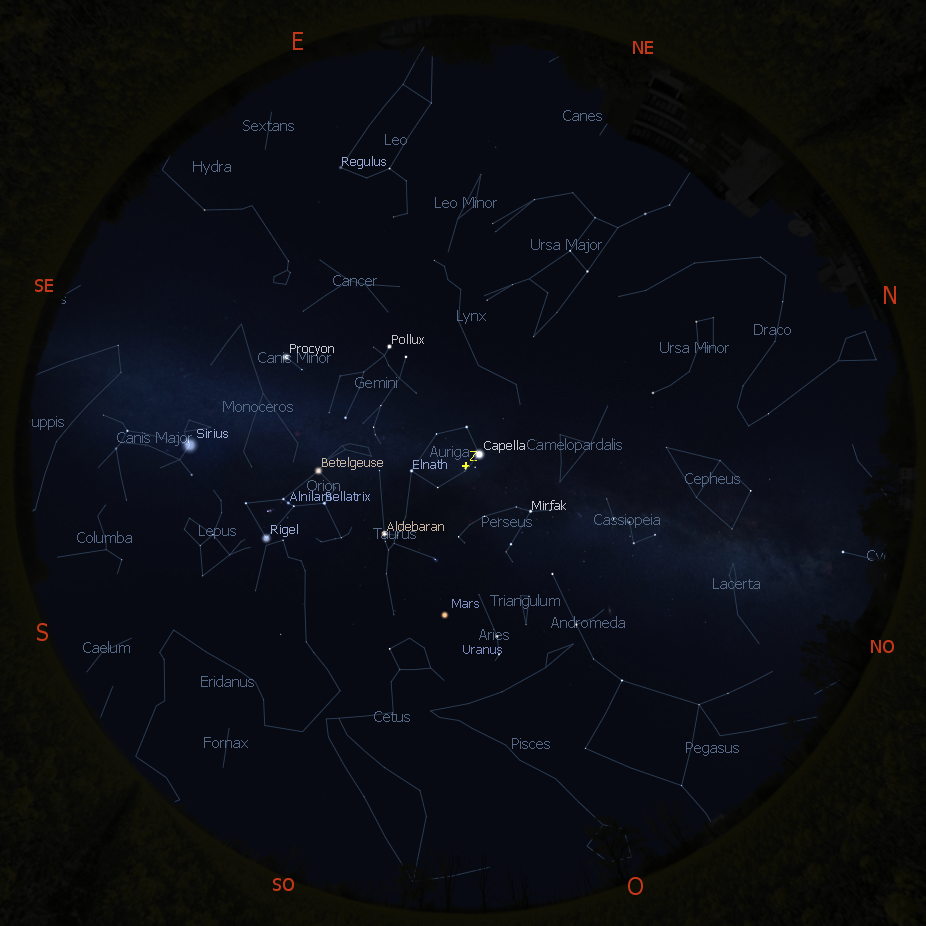 Welcome back to our monthly guide to the night sky. It’s time to find out what’s waiting for us in the sky of February: the Moon, celestial objects, conjunctions and more astronomical events!

MARS – the Red Planet is still the most notable planet of the sky of February, an easy target for our telescopes. Mars, Betelgeuse and Aldebaran will appear almost aligned, starting from the second half of February. In the night between February 23 and February 24, Mars will transit from Aries to the Taurus constellation, getting apparently closer to the Pleiades cluster.

JUPITER and SATURN – Spotting our favourite giant planets will be tough, for Jupiter and Saturn will be very low above the horizon right before sunrise, but their visibility will improve throughout the month.

MERCURY – Mercury will be beside Saturn and Jupiter in the second half of February. In the morning of February 23, Mercury and the lord of the rings Saturn will be in conjunction.

VENUS – Observers will be able to spot Venus right before dawn, in the first half of February. The Venus-Jupiter conjunction will occur on February 11, but it won’t be easy to see, due to their closeness to the horizon and the Sun.

Auriga and the bright Capella will dominate the sky during the first hours of the night, along with the Winter Hexagon’s stars, the brightest of this season.
Orion, Gemini and Taurus are among the finest constellation in the sky of February, between south-east and south-west.
In the western portion of the sky, we can still observe Pegasus and Andromeda, lower and lower above the horizon as time passes.

Let’s start with the hunter to get a sense about the location of the objects and the stars in the sky of this month. Here in Orion, the two brightest stars are Rigel and Betelgeuse.
By following the three stars in the Belt of Orion, we can find Sirius in Canis Major and Aldebaran in Taurus.

Orion houses the Great Nebula Messier 42, the most observed and studied star formation region of the whole night sky. Inside the cloudy M42, we can see the star cluster known as “The Trapezium”.
Astrophotographers and amateurs astronomers may try to get a picture of the stunning Horsehead Nebula, Barnard 33. It is one of the favoured targets among night-sky photographers, and it’s located in front of a bright nebula known as IC 434.

The already mentioned Sirius, the brightest star in the night sky, is in the Cans Major constellation, along with another beautiful sight: the open cluster M41.
Now, let’s point our telescopes to the Monoceros constellation, the unicorn. Here is one the most stunning and mesmerizing multiple star system of the heavens, Beta Monocerontis, Herschel’s “Wonder Star”.

In Gemini, we’ll find a look at the amazing twins, Castor and Pollux, and the open cluster Messier 35, a stargazer’s favourite object.

Taurus and its clusters of stars are still visible, especially in the first hours of the evening. You won’t need instruments to get a fine look at the Hyades and the Pleiades. A stunning double star, Theta Tauri, is located right in the Hyades cluster, visible to the naked eye.
Let’s also have a look at the wondrous Pleiades cluster. We recommend using a Short-Focal Lenght refractor or binoculars, to get a fine, clear view of the main components of this cluster.
The Beehive Cluster, Messier 44, is in the Cancer constellation. A widespread object, relatively close to our Solar System, it is visible to the naked eye under clear skies.

The Great Bear’s brightest stars make up the Big Dipper, also known as the Plough asterism. This constellation houses many beautiful sights. Two of these are the stars Mizar and Alcor, both visible to the naked eye close to each other. Under clear skies, we should also search for the galaxies Messier 81 and Messier 82.

The Whirpool Galaxy Messier 51 is located in the Canes Venatici constellation. This object is made up of two interacting galaxies, NGC 5194 and NGC 5195.

The constellation of Virgo will be high above the horizon not before the late hours of the night. Here observers will find the great Messier 87 galaxy, known also as Virgo A. The Event Horizon Telescope Project captured a stunning image of the supermassive black hole of Virgo A. It was the first time that scientist were able to get a view of a black hole.
This was an outstanding effort: this galaxy lies 53 million light-years away from us!