The brightest stars in the winter night sky 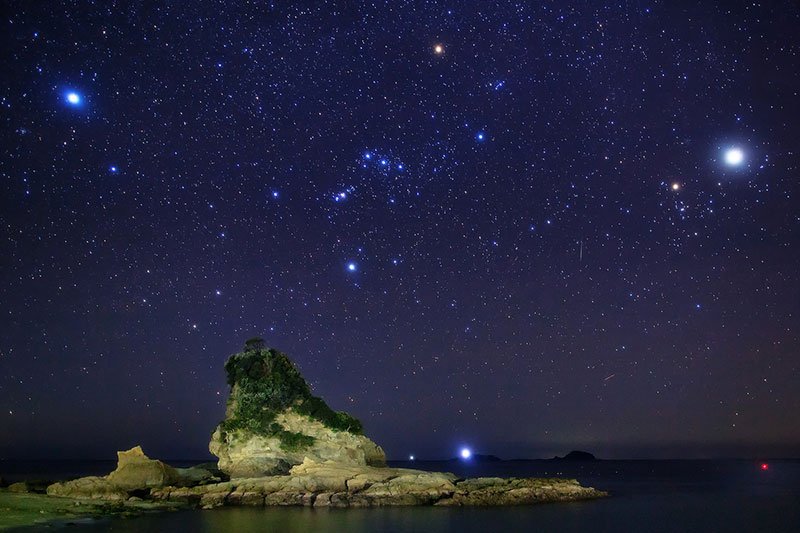 The winter season is almost here. Here is all you need to know about the brightest stars you’ll see in the winter sky, from mid-latitudes of the northern hemisphere. These stars can be identified as the vertices of two asterisms: The Winter Triangle and the Winter Hexagon. 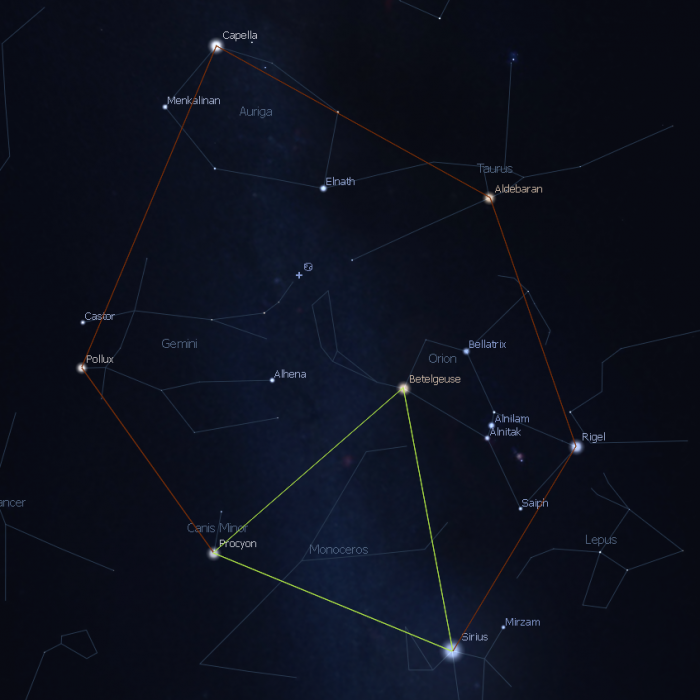 Sirius is the brightest star of the night sky, with a visual magnitude of -1.49. It’s 8.6 light-years away from the Solar System in the Canis Major constellation, making it one of the closest stars from our Sun.

Sirius is a binary star. The star that we see with our eyes is the main component of the system, called Sirius A. Its companion, Sirius B, is a feeble white dwarf, the remnant of a red giant star that ended its existence roughly 120 million years ago. Sirius B is also the closest white dwarf from our solar system.

Capella is the sixth brightest star of the night sky. It lies 43 light-years away from us in the constellation of Auriga. Observers will not have troubles to locate this bright star: it’s the upper vertex of the Winter Hexagon.

We may just perceive one star we look at Capella, but this star is a quadruple star system made of two binary systems. The main one has two giant yellow stars in an advanced stage of their evolution. The second one is made of two faint main-sequence red dwarf stars.

Rigel is a blue supergiant, the brightest star in the constellation of Orion. It is located 860 light-years away from the Solar System. Astronomers once classified Rigel as Beta Orionis, meaning it’s the second brightest star of its constellation. Rigel is actually more luminous than Betelgeuse, Alpha Orionis. Being both variable stars, it may rarely happen that Betelgeuse outshines Rigel.

The white dot we see in the sky is a multiple star system, that contains at least 3 or 4 stars (Rigel A, Ba, Bb, C). The main component Rigel A is a star roughly 20 times more massive than the Sun. It will end its existence in a supernova explosion, leaving behind a neutron star or a black hole.

Procyon is the brightest star of the Canis Minor constellation. It lies 11.5 light-years away from us and it is the eighth brightest star in the night sky (+0.34 apparent magnitude).

Like Sirius, Procyon is a binary system. The main star, Procyon A is still in the main sequence phase of its existence. It will enter the subgiant phase in a few million years since it has almost exhausted all its hydrogen in its core. Procyon B is a small white dwarf that orbits the main star Procyon A. It is less luminous but larger than the one around Sirius A.

Betelgeuse is one of the largest stars visible with the naked – eye and it’s usually the 10 brightest stars of the night sky. It is a massive red supergiant, the second brightest star in Orion. Betelgeuse mass ranges from 10 to 20 solar masses.

This star is a well known variable star, thus it varies its luminosity more or less regularly (from +0.3 to +1.2 on average). From October 2019 to February 2020, something strange happened to this star: its magnitude dropped by a factor of 3 in two occasions. Although many people claimed that Betelgeuse was about to go supernova, astrophysicists around the world were much more cautious. Recent studies confirmed that the action of a dust cloud passing in front of the star and regular pulsations of its surface caused the magnitude drops of Betelgeuse luminosity.

Aldebaran is the main star of the constellation of Taurus, located on the same line of sight of Hyades Cluster, thus its very easy to be spotted in the sky.

This star, known also as Alpha Tauri, is a giant star, 65 light-years away from the Solar System. Astronomers have discovered that there is one planet orbiting around Aldebaran, named Aldebaran B. It’s a gas giant, 6 times more massive than Jupiter, the largest planet in our Solar System. When Aldebaran was located in its main sequence stage, the planet was inside the habitable zone of the system.

The companion of Castor in the constellation of Gemini, Pollux is a yellow-orange giant star, 34 light-years away from us. It lies in a more advanced evolutionary stage than our Sun, and astronomers think that Pollux was once a white-blue star.

In 1993, scientist theorized that a planet may be orbiting Pollux, given some inexplicable variations in the star’s luminosity. Astronomers discovered the planet Pollux b in 2006, confirming the original hypothesis. The International Astronomical Union chose the name “Thestias” for Pollux b.