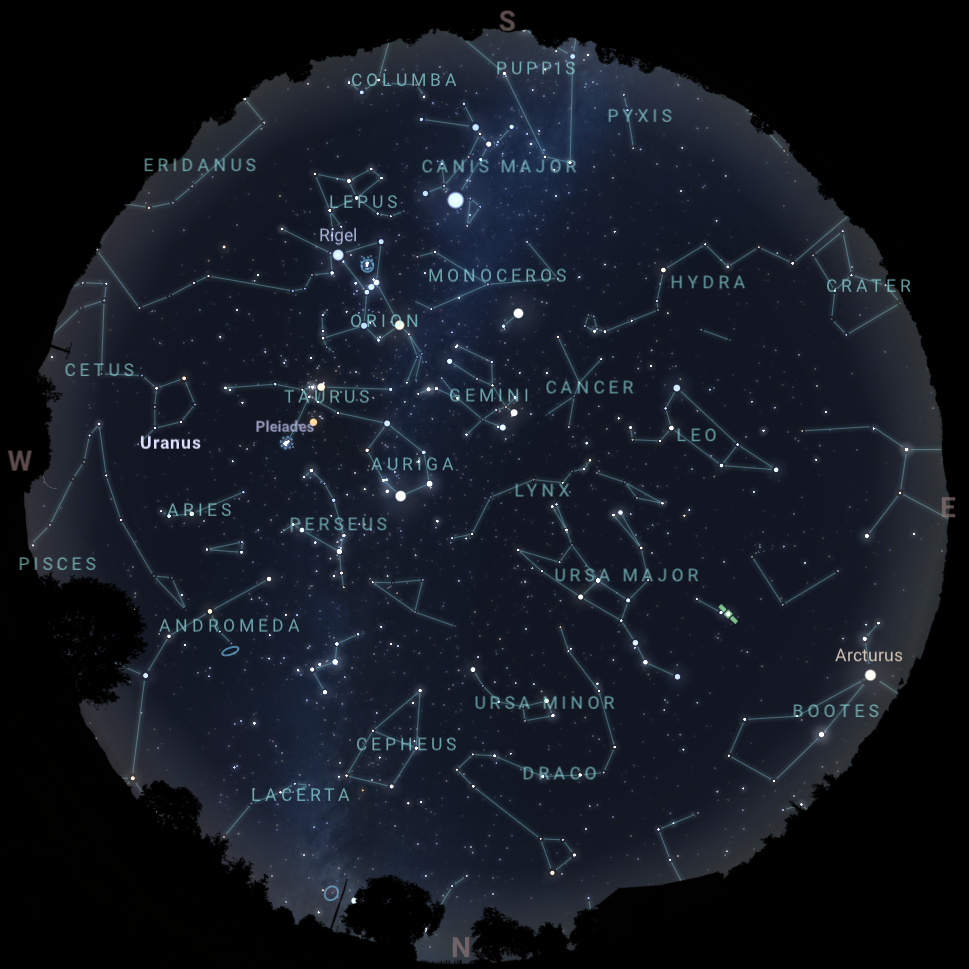 Conjunctions, constellations, astronomical events and celestial objects to observe in the night sky of March 2021! Let’s find them out together in our guide to this month’s night sky!

The phases of the Moon this month

Planets and conjunctions in the night sky of March

MARS – We will spot Mars in the constellation of Taurus. The red planet is still pretty bright in the early night sky and will be the protagonist of some spectacular conjunctions.
• March 3 – conjunction between Mars and Alcyon, which is the brightest star in the Pleiades cluster.
• 19 March – Mars-Moon-Aldebaran Triangulation. The Moon will first be in conjunction with Mars. Subsequently, our satellite will be in conjunction with Aldebaran.
• March 20 and 22 – Mars-Aldebaran conjunction (20 for ecliptic longitude and 22 for right ascension).

JUPITER, SATURN AND MERCURY – The two giants and the planet Mercury will be observable before dawn. On March 5, Mercury and Jupiter will be in conjunction. The next day, Mercury will reach its maximum west elongation. Then, on the morning of March 10, our satellite and the lord of the rings Saturn will be the protagonist of another main conjunction, forming a majestic celestial picture with Mercury and Jupiter already anticipated in our guide to the main astronomical events of 2021.

URANUS – the ice giant is in the constellation of Aries. We’ll be able to observe Uranus after sunset just for a few hours.

The winter constellations will dominate the night sky of march in the early evening. In fact, the constellations of Orion, Canis Majoris, Taurus and Monoceros are still well observable between south and southwest.

In the east and south-east portion of the night sky, Leo, its bright star Regulus and Cancer will show up early.

To the north-east, the Ursa Major will appear higher and higher as time passes by. Cassiopeia and Cepheus will be lower and lower in the sky as time passes by. In this direction, we shall give a final farewell to Andromeda and the Triangle.

Near the zenith, we will find Lynx, Gemini, Cancer, Auriga and Ursa Major.

The typical constellations of the spring period will show up between the north-east and south-east. Among these we find Bootes, Virgo, Coma Berenices, Corona Borealis and Hercules, along with a still rather shy Lira, that will rise from the northeastern part of the night sky. The main stars of Boote, Virgo and Leo form the asterism called the Spring Triangle. In some references, the Spring Triangle’s vertices are Arcturus, Spica and Denebola, which is the second brightest star of Leo that replaces Regulus in the asterism. Another famous asterism in this region is the Great Diamond, formed by the Cor Caroli-Arcturus-Spica-Denebola star quartet.

Turning our sight to the south and lifting it upwards, we will notice the constellation of Leo, which will accompany the Big Dipper, now near the zenith. At last, the winter constellations will set to the southwest and northwest.

It’s time to discover the main celestial objects and stars that you may want to observe in the night sky of March!

The typical winter constellations, such as Orion, together with the famous Messier 42 nebula, will still be visible in the night sky this month.

Sirius, the brightest star in the night sky, lies in Canis Major together with the open cluster M41.

In the constellation of Gemini, we should pay a visit to the stars Castor and Pollux. To conclude, let’s take a look at the splendid open cluster Messier 35.

Taurus and its clusters will still be visible in the early evening.
Another spectacular deep-sky object visible in this constellation is the remnant of supernova Messier 1, the Crab Nebula, about 6500 light-years away from us. Here lies the Pulsar PSR B0531 + 21, a neutron star. Neutron stars are compact objects, stellar remnants, all that remains of high mass stars once their life cycle ends. PSR B0531 + 21 originated from a star that went supernova 7500 years ago and it was seen from Earth in the year 1054 AD.

The region comprising the constellations of Virgo, Coma Berenices and Leo contains a vast amount of galaxies.

In Virgo, quite high above the horizon in the late evening, it will be possible to see the galaxy Virgo A, or M87. The supermassive black hole in the centre of this galaxy was studied and imaged by the Event Horizon Telescope. The project’s observations produced the first historical image of a black hole, on April 10, 2019. Another spectacular galaxy visible with a medium-sized instrument is the Sombrero Galaxy, M104.

Next stop: Porrima. This star is an astounding binary system that can be solved with the aid of a telescope. Porrima, or Gamma Virginis, is about 38 light-years away from us.

Coma Berenices is nestled between the constellations of Boote, Canes Venatici, Leo, Virgo and Ursa Major. The three main stars of Coma have an apparent magnitude greater than +4; therefore, it’s hard to spot them, although they are visible with the naked eye. The Black Eye Galaxy, M64, and the globular cluster M53 are among the brightest deep sky objects in this region.

In Bootes, we will find Arcturus, a welcome sight in the sky of March. It is the brightest star in the northern hemisphere, the fourth in the entire night sky. In fact, Arcturus is a huge star, and also a close one. It is an orange giant roughly 37 light-years from us,  about 7 billion years old and it possesses a mass very similar to that of our Sun. However, Arcturus is in a more advanced stage of its evolutionary cycle.

There are many double and binary stars present in this constellation. Above all, we recommend taking a look at Epsilon Bootis, or Izar, one of the most beautiful in the herdsman.
On the deep sky front, the only sufficiently bright object in Bootes is the globular cluster NGC 5466.

Leo’s main star, Regulus, is a quadruple star system roughly 79 light-years away from us. The main component is Regulus A, a spectroscopic binary, while the other two components are the stars Regulus B and C, which lie about 2 arc minutes away from the main star system.

Algieba is another beautiful star system in Leo. It is a binary star: the two components are a red-orange star and a yellow one.

In Leo, we will also find Leo’s Triplet. This is a group of three galaxies known as M65, M66 and NGC 3628 located about 35 million light-years away from us.

Cor Caroli, “Charles’s Heart“, is the brightest star in Canes Venatici. It’s a binary star and it lies about 110 light-years away from us.

In this constellation, we shall see the globular cluster M3, which is a swarm of about 500,000 stars, 34,000 light-years away from the Solar System. With good diameter telescopes, we will be able to observe the Whirpool Galaxy M51. It is a magnificent pair of interacting galaxies, known as NGC 5194 and NGC 5195.

Ursa Major has many astounding celestial objects waiting for us. In fact, The Great Bear houses one of the most famous asterisms of the night sky: the Big Dipper. Starting right from the Bear’s tail, in the Big Dipper, Mizar and Alcor are a wonder that we should not miss. It is one of the most famous multiple star systems of the night sky.
Lastly, in Ursa Major, there are three superb galaxies, among the most favourite for both visual amateur astronomers and astrophotographers. We are talking about M81 (Bode’s Galaxy), M82 (The Cigar Galaxy) and M101 (The Pinwheel Galaxy).

That’s all for the night sky of March! Clear Skies and stay safe!

Reference image: the night sky of March 2021, via Stellarium Web