The sky of April 2021 – planets, conjunctions and main astronomical events 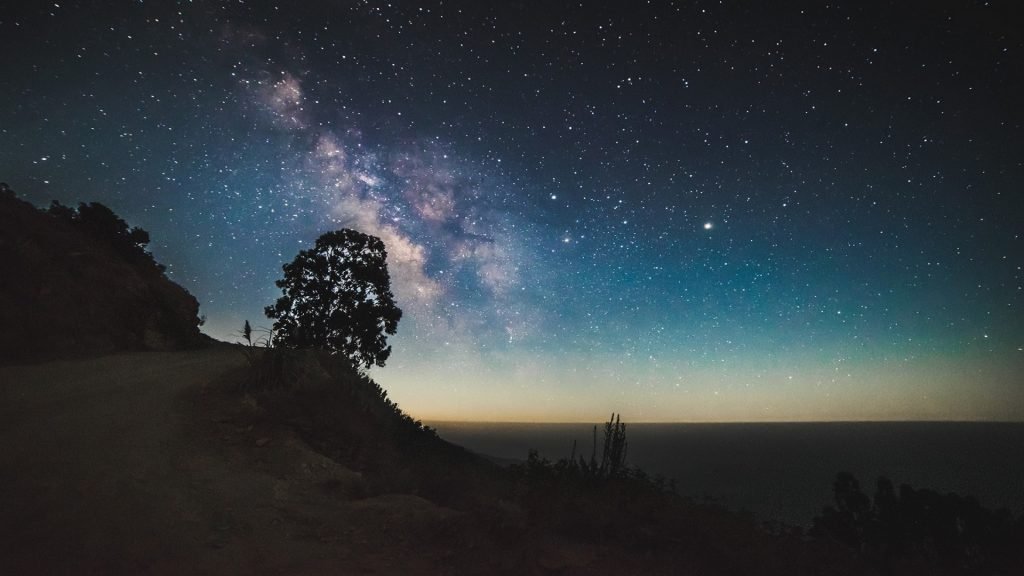 Our monthly guide to the heavens and the night sky of the month returns! It’s time to find out what to observe in the sky of April 2021.

Shooting stars are back in the northern hemisphere! The Lyrids meteor shower will be active from April 16 to 26, reaching its peak on April 22.
The Lyrids are remnants of a non-periodic comet, the C / 1861 G1 (Tatcher). The radiant of the swarm is in the constellation of Lyra, near the bright Vega.
The Moon will be bewteen the First quarter and Waxing Gibbous phases during the Lyrids peak activity. It should not disrupt the observation excessively, since our satellite lies in the constellation of Gemini. The brightness of these meteors, however, is not very high (about +2). Consequently, the meteors will be easier to observe from suburban and rural areas.

THE MOON AND THE VISIBLE PLANETS

The phases of the moon this month

Last quarter: April 4th.
New Moon: April 12.
First-quarter: April 20.
Full Moon: April 27.
The Full moon of April is traditionally called “The Pink Moon” and will be a “Supermoon“. A Supermoon occurs when a Full Moon happens right next to the lunar perigee. This time, the distance of our satellite is roughly 354,000 km from Earth.

Planets and conjunctions in the sky of April

MARS – Mars is still the protagonist planet in the sky of April, visible in the early evening hours. Observers will find it in the constellation of Taurus, though it will transit through Gemini between 23 and 24 April. Here are the conjunctions and astronomical events that will involve the red planet:
• April 3 – Mars will be almost aligned with the stars Aldebaran and Elnath. Also, Elnath and Mars will be in conjunction on April 11.
• April 17 – conjunction between the Moon and Mars. Unfortunately, the exact moment of the event will not be visible from Italy.

JUPITER AND SATURN – The visibility of the giants Jupiter and Saturn is improving in the morning skies. The Moon will be in conjunction with Saturn on April 6; with Jupiter the following day.

VENUS AND MERCURY – They are practically undetectable. Only Mercury will be visible briefly towards the end of the month after sunset.

URANUS AND NEPTUNE – Uranus is located in the constellation of Aries, visible only for a few hours after sunset. Neptune is in Aquarius, but it will be very difficult to identify it with a telescope, showing up in the sky just before dawn.

THE CONSTELLATIONS OF THE MONTH

Observers will find the constellations of the Winter Hexagon very low above the horizon, between southwest and west.
Between the north-east and south-east, Leo, Virgo, Bootes, the small Coma Berenices and Corona Boreale will be the protagonists. To the south-east and south parts of the sky, the gigantic Hydra will also be present, although the only star fairly visible in this region is Alphard.
In the northern part of the celestial sphere, the Big Dipper in Ursa Major appears very high and close to the zenith, along with Lynx. Opposite to the Bear, therefore lower, we will find Cassiopeia and Cepheus.

To the south, we will find Leo and Virgo dominating the night sky of april while Auriga and Gemini will still be visible to the west.
Heading east, the Bootes will advance towards its ascent to the zenith, where we currently find the Hunting Dogs, Canes Venatici. Corona Borealis, Hercules and Lyra, with its beautiful star Vega, will follow Bootes in its run.

The main stars of Bootes, Virgo and Leo form the asterism called the Spring Triangle. Some authors indicate Arcturus, Spica and Denebola as the stars of the Triangle, replacing Regulus with Denebola. Another asterism in this region is the Great Diamond formed by the quartet Cor Caroli, Arcturus, Spica and Denebola.
As the night hours pass, observers will have an anticipation of the summer night sky. The Milky Way will rise above the horizon, along with it the constellations of the Swan and the Eagle. Ophiucus and the beautiful Antares in Scorpius will also be visible, which will rise to the south-east after about 11.40 pm.

In the early evening in the sky of April, it will still be possible to take a fleeting glimpse at the constellations that kept us company in the cold winter months. We say farewell to the great hunter Orion, Canis Major, Taurus by taking a very last look at the wonders in their borders.
We should also not miss the opportunity to take a last look at the spectacular Beta Monocerontis, William Herschel’s Wonder Star.
Auriga, Gemini and Cancer are still clearly visible: we can still admire the splendid trio of open clusters M36, M37 and M38 in Auriga, the Beehive Cluster in the constellation Cancer, the splendid open cluster Messier 35 in the constellation of Gemini.

A NOVA IN CASSIOPEIA

A sudden flare in the sky called Nova Cas 2021.
Discovered by Yuji Nakamura on March 18 2021, Nova Cassiopeia 2021 (V1405 CAS) erupted in the most famous “W” of the night sky, not far from the open cluster M52. While writing this article, its apparent magnitude is +8 approximately.
It is not visible to the naked eye; you will need good binoculars or a telescope to see Nova Cas 2021.

In ancient times, these events were just interpreted as “new stars“, never observed before as they are usually too faint to be identified. Hence the origin of the term “nova“, which has remained with us to this day.
Today, astrophysics has made it possible to know the characteristics and evolution of novae more clearly. They are explosive and intense astronomical events, associated with binary star systems in which there are a star and a degenerate companion, a white dwarf. In this context, the white dwarf captures matter from the companion star, accumulating hydrogen on its surface. The accumulation of hydrogen eventually causes nuclear chain fusion reactions, leading to the explosive phenomenon that generates the nova. The star’s brightness increases considerably, releasing a large amount of energy, shining in the darkness of interstellar space.

How can you identify Nova Cas 2021? Extend the line between Caph and Shedar until you find a cluster of stars, cluster M52. Below M52, you will find a 4-star belt, two white and two reddish, very faint. The brightest star in this area is HIP 115691, just below the belt. The nova lies approximately between this star and the white stars at the vertices of the “belt” mentioned above. Try to picture a sort of a triangle with these stars and you’ll find it. You can spot by its visual companion called HIP 115566.
For GO-TO mount owners, the coordinates are 23h 24m 47.73s in right ascension and + 61 ° 11 ‘14.8” in declination.

Although Cassiopeia is not particularly high above the horizon in this period, try to observe it and follow its evolution.

The observation of Ursa Major is optimal in the sky of April. The main stars of this constellation form the famous Big Dipper asterism.
Mizar and Alcor are one of the most famous celestial couples of the heavens, located in the tail of the Bear. Dubhe, the second star by apparent magnitude, is another multiple star system that may seem just another double star but it is not. Dubhe is a quadruple star system.
April is a perfect time to observe the galaxies in Ursa Major. The amazing Pinwheel Galaxy (M101) and the Bode galaxies M81 and M82 (the Cigar Galaxy).

The region comprising the constellations of Virgo, Coma Berenices and Leo contains an extremely large number of galaxies.

Regulus stands out in the constellation of Leo. It is a quadruple star system about 79 light-years away. The main component is a spectroscopic binary, while the stars Regulus B and C can also be identified with a small telescope about 2 arc minutes from the main component, Regulus A.
Another splendid multiple star system in Leo is Algieba or Gamma Leonis. Algieba is a binary star, resolvable with a telescope, formed by a splendid duo of red-orange and yellow stars. Zosma and Denebola are also double stars that we should add to our list of objects to observe with a telescope. For astrophotography enthusiasts, don’t miss the Leo’s Triplet, formed by the galaxies M65, M66 and NGC 3628, about 35 million light-years away from us.

In Virgo, it will be possible to locate the galaxy Virgo A, or M87. The supermassive black hole located at the centre of this galaxy was studied and imaged by the Event Horizon Telescope.
The project’s observations produced the first historical image of a black hole on April 10, 2019. A new processed image showing polarized light paths of this cosmic colossus was released on March 24, 2021.
Another spectacular galaxy detectable with a medium-sized instrument is the Sombrero Galaxy, M104.
Among the double stars, we suggest the observation of Porrima, Gamma Virginis, a splendid binary system.

Coma Berenices is located between the constellations of Boote, Canes Venatici, Leo, Virgo and Ursa Major. The three main stars of Coma all have an apparent magnitude higher than +4; they are therefore difficult to identify, although they are visible to the naked eye. Among the deep-sky objects in this region are the Black Eye Galaxy M64 and the globular cluster M53.

Arcturus, in Boote, is the brightest star in the northern celestial hemisphere, the fourth in the entire night sky. It is a 7 billion years old orange giant 37 light-years away from us. There are also numerous double and binary stars present in this constellation. Izar is undoubtedly one of the most beautiful in the Bear Guardian, but we must not deny a visit to the magnificent Delta, Kappa, Xi, Mu and Iota Bootis. There are not many deep sky objects visible in Bootes: the only sufficiently bright one is the globular cluster NGC 5466.

The main star of Canes Venatici is Cor Caroli, “The Heart of Charles”, a binary star located about 110 light-years away. Here we will also find the globular cluster M3.
With telescopes wide enough, we will be able to observe the galaxies M51, the Sunflower Galaxy M63 and M94.
In this region, we can also observe the stunning red star called La Superba, Υ Canum Venaticorum, named in this way by Angelo Secchi. La Superba is a particular type of carbon star, near the end of its existence and located about 1000 light-years away.

In the constellation of Hercules, we find the amazing globular cluster Messier 13, located between the stars Eta and Zeta Herculis. Finally, Ras Algheti is a splendid multiple star system, one of the greatest sights in this constellation.

That was all for the April sky!
Stay with us, we shall take you among the stars!