The sky of May 2021 – planets, stars and main astronomical events 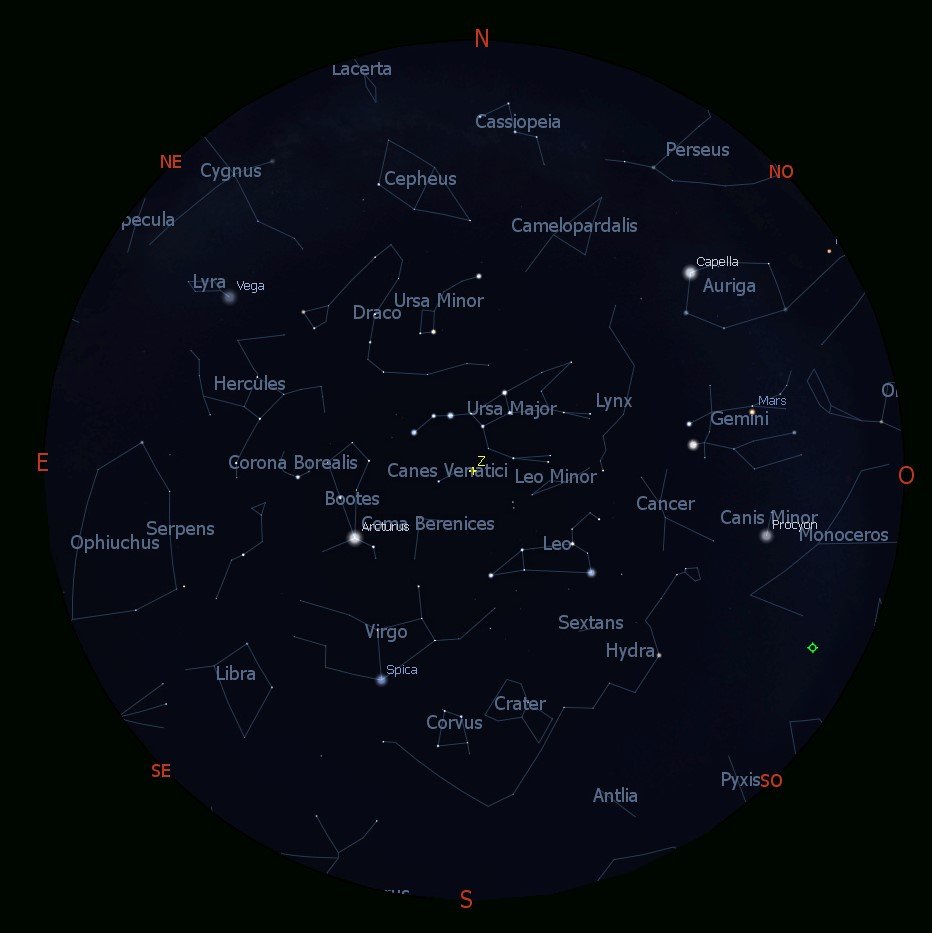 Welcome back to the sky of the month with Astronomitaly! The time has come to find out what to observe in the sky of May 2021!

METEOR SHOWERS IN THE SKY OF MAY

The first meteor shower we encounter in this month will be the Eta Aquarids, a remnant of Halley’s comet. It is a relatively intense swarm, though difficult to observe, with a ZHR between 50 and 60 shooting stars. The period of activity of the Eta Aquarids is between April 19 and May 28, peaking around May 6. The best time for observing the Eta Aquarids is in the hours right before dawn, as the constellation of Aquarius rises from the horizon.

The second main swarm in the May sky will be that of the Eta Lyrids, much less spectacular and crowded than the Eta Aquarids. The meteors originate from the dust of Comet C / 1983 H1 IRAS-Araki-Alcock and will peak around May 10.

MARS – The red planet is located in the constellation of Gemini, with an apparent magnitude between +1.56 and +1.73 approximately over May. The conjunction with the Moon on May 16 will not be visible from Italy. On the evening of May 23, Mars will be in conjunction with the double star Delta Geminorum.

JUPITER AND SATURN – The gas giants Jupiter and Saturn are visible late at night. Between May 4th and 5th, we’ll see our satellite and the two planets dancing together in the night. In fact, the Moon will be in conjunction with Saturn on the 4th and with Jupiter on May 5th. At the end of the month, on May 31, we will be able to witness the second conjunction between our satellite and the lord of the rings.

SKY OF MAY – CONSTELLATIONS

The winter constellations have now faded, although Auriga and Gemini are still visible between west and north-west. Between the southeast and the south-west, the constellations enclosed in the asterisms of the Spring Triangle and the Diamond of Virgo stand out with Hydra, Crater and Libra.
Canes Venatici will dominate the celestial sphere in the early evening of the sky of May. To the east, Ophiuchus and Serpent rise together, along with Hercules.
Towards the northeast, Lyra and Cygnus will rise. These constellations are an appetizer of summer evenings. To the north, we’ll find the circumpolar constellations Darco, Ursa Major and Lynx. On the other hand, Camelopardalis, Cassiopeia and Cepheus will appear lower, under the Ursa Minor.

Virgo and Leo are still visible between the south and west. Facing south, we will notice Bootes and its splendid Arcturus near the zenith, accompanied by the faint stars of Coma Berenices and the Corona Borealis.
Towards the south-east, although low on the horizon, the splendid red star Antares will stand out, together with Scutum and Ophiucus.
Looking east, Hercules and the constellations of the Summer Triangle will rise: Lyra, Cygnus and Aquila.
To the north, the Big Dipper will fall to the northwest while Dragon and Cepheus will rise higher.

Let’s get to the heart of astronomical observations and see what the celestial sphere holds for us in the sky of May 2021!

We can begin our observations in the May sky right from the Ursa Major. The main stars of this constellation form the famous Big Dipper asterism.

Among the double stars, Mizar and Alcor are one of the most famous celestial couples ever, located in the tail of the Bear. Dubhe, the second brightest star in the Bear, is another double star that can be resolved with a telescope. Dubhe, in reality, is a quadruple star system. There are also a large number of variable stars in this constellation, although almost all of them require the use of a telescope to be appreciated. One of the most interesting is the eclipsing binary W Ursae Majoris.

Among the deep-sky objects, we remember the spectacular galaxies M101, M81 and M82.

Cor Caroli, “The heart of Charles”, is the main star of the Canes Venatici, one of the vertices of the Great Diamond. It is a binary located about 110 light-years away, the components of which appear white and yellow. In this region, we will also find the globular cluster M3, the galaxy M51, the Sunflower galaxy M63 and M94.

In Canes Venatici, we can also observe La Superba (Υ Canum Venaticorum). Called “La Superba” by Angelo Secchi, it is a splendid variable red star. La Superba is believed to be nearing the end of its existence, which will end with the release of the layers of its atmosphere into space, thus forming a planetary nebula. It also belongs to the class of carbon stars, asters with atmospheres rich in this element.

The main star of the Leo constellation is Regulus, one of the vertices of the Spring Triangle. It is a quadruple star system, about 79 light-years away. The main component, Regulus A, is a spectroscopic binary, while the stars Regulus B and C can also be detected with a small telescope.

Algieba, or Gamma Leonis, is another splendid multiple star system. Gamma Leonis is a binary star, resolvable by telescope, formed by a splendid duo of red-orange and yellow stars. Zosma and Denebola are also double stars, to add to our list of objects to observe with the telescope. For astrophotography enthusiasts, the Leo Triplet is one of the most popular targets in spring skies, formed by the galaxies M65, M66 and NGC 3628. The Triplet is roughly 35 million light-years away from us.

On the border between Virgo and Coma Berenice lies the Virgo Cluster, made up of more than 1000 galaxies. The Virgo Cluster is the heart of the Virgo Supercluster, a cosmic superstructure to which the Local Group, our neighbourhood in the Universe on a large scale, also belongs.

The brightest members of the cluster can be identified with medium-sized telescopes (starting from 150mm) under clear skies. Among these, we remark the galaxies Virgo A, or M87 together with M49, M86 and M60. Does the name M87 ring any bell? This is the galaxy that hosts the black hole studied and imaged by the Event Horizon Telescope!

M104, the Sombrero Galaxy, is another spectacular galaxy in Virgo, about 30 million light-years from us. Classified as a spiral galaxy, the Sombrero presents itself to telescopes almost edge-on, with a very bright central core.
Among the double stars, we cannot fail to mention Porrima, Gamma Virginis, a splendid binary that can be resolved with the aid of a telescope.

Coma Berenices lies between Bootes, Canes Venatici, Leo, Virgo and Ursa Major. All the main stars of Coma have an apparent magnitude greater than +4; they are therefore visible to the naked eye, but not easy to spot under light-polluted skies. Among the deep-sky objects in this region are the Black Eye Galaxy M64 and the globular cluster M53.

Arcturus, in Bootes, is the brightest star in the northern celestial hemisphere, the fourth in the entire night sky. It is an orange giant located about 37 light-years from us, with an estimated age of about 7 billion years.

Bootes is also home to numerous truly remarkable double and binary stars, such as Delta, Kappa, Xi, Mu, Iota Bootis and Izar. The double star Izar is a mandatory target. In fact, Friedrich Georg Wilhelm von Struve renamed Izar “Pulcherrima“, which stands for “the most beautiful”.
On the deep sky front, the only sufficiently bright object in this constellation is the globular cluster NGC 5466.

Despite not having any first magnitude star, Hercules is quite easy to recognize, being in the space between the Boote and the Lira. The central stars of Hercules form two easy-to-remember simple asterisms to orient yourself: the Butterfly and the Keystone (basically, the smaller wing of the Butterfly). Here we find the amazing globular cluster Messier 13, located between the stars Eta and Zeta Herculis.

M13 is a feast for the eyes. Like any globular cluster, its appearance literally resembles a swarm of stars concentrated in a small portion of the sky. Its apparent magnitude of +5.8 makes it even detectable with the naked eye under dark skies.

The main star of Hercules is Ras Algheti, a splendid, partially resolvable multiple star systems. Its main components are about 4.6 seconds of arc away from each other

A SNEAK PEEK OF THE SUMMER SKIES

It is still early to fully enjoy the wonders that we will observe together in the summer. However, those who’d like to wait for the dawn will already be able to start observing some of the spectacular deep sky objects in the constellations of Lyra, Sagittarius, Scorpius, Ophiuchus and Scutum. Among these, the nebulae M16, M17 and M20, the globular clusters. M4, M10 and M22 and the Planetary Nebula M57.

As anticipated in the planets section, Jupiter and Saturn will also rise late in the night to keep us company until the sun rises.

That was all for the sky of May 2021!
Stay tuned! We shall take you among the stars!