Discovered a cloaked black hole at the origins of the Universe 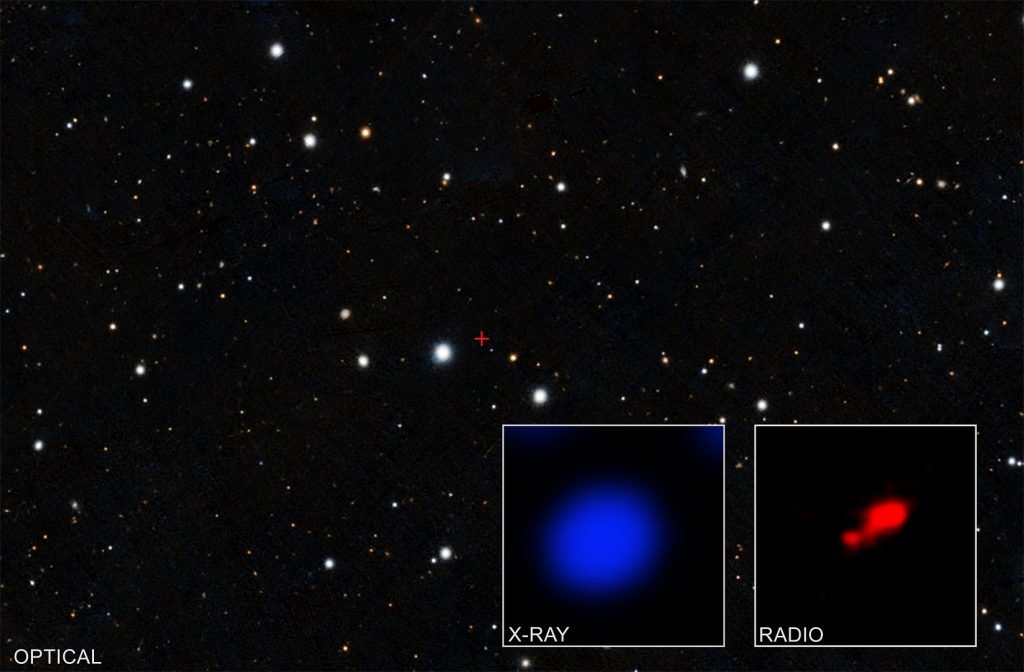 The supermassive black hole (“quasar”) is the first case of a cloaked black hole discovered to be so far away.

“It is extraordinarily difficult to find quasars in this cloaked phase because much of their radiation is absorbed and we cannot detect it with current instruments”. Said Fabio Vito of the Pontificia Universidad Católica de Chile, in Santiago, Chile, who led the study. With him a team of international astronomers: Cristian Vignali, of the University of Bologna, Riccardo Nanni and Marcella Brusa, of the Department of Physics and Astrophysics.

Roberto Gilli, of the INAF of Bologna who collaborated in the discovery together with Giovanni Zamorani, Francesco Calura, Andrea Comastri and Marco Mignoli, explains: “We suspect that most of the supermassive black holes of the early Universe are cloaked: it is therefore crucial to identify them and study them to understand how they can increase their mass by a billion suns so quickly ”. NASA’s Chandra X-ray Observatory also made the discovery possible.

What are supermassive black holes

The mysterious supermassive black holes, or quasars (contraction of Quasi-stellar Radio Source), are millions or billions of times more massive than our Sun. They grow by extracting material from a disk of surrounding matter. They are billions of light years away from us, on the borders of our Universe. Therefore we can find them in regions of space formed by a considerable presence of gas. Their rapid growth generates large amounts of radiation in a very small region around the black hole. In their initial phase, a dense cloud of gas feeds the material in the disk surrounding a supermassive black hole during its initial growth period. It “hides” much of the bright light of the quasar from our sight. As the black hole consumes material and becomes more massive, the gas in the cloud runs out, until the black hole and its luminous disk are uncovered.

The origins of the supermassive black hole

It is therefore extremely difficult, as Fabio Vito of the Pontificia Universidad Católica de Chile stated, to identify them at this stage. “This was a complete surprise,” co-author Niel Brandt of Penn State University at University Park, Pennsylvania said. “It was like we were expecting a moth but instead we saw a cocoon. None of the other nine quasars we observed were cloaked, and that’s what we expected.”

According to Chandra data, the quasar would have originated 850 million years after the Big Bang. It’s covered by a dense cloud of gas that is probably fueling its growth. So it would be very close to the initial phases of the Universe (13.5 billion years ago).

The observations of a quasar called PSO167-13 was the starting point to make this new discovery. Pan-STARRS, an optical light telescope in Hawaii, first discovered it. Since PSO167-13 was part of these observations, even this quasar would not have been obscured.

Vito’s team tested this idea using Chandra to observe PSO167-13 and nine other quasars discovered with optical probes. After 16 hours of observation, we detected only three photons of X-ray light from PSO167-13, all with relatively high energies. Low-energy X-rays are absorbed more easily than those with higher energy. So the likely explanation is that the gases highly obscure the quasar, so that we can detect only high-energy X-rays.

An interesting turning point for PSO167-13 is that the galaxy hosting the quasar has a neighboring companion galaxy. It is visible in data previously obtained with the Atacama Large Millimeter Array (ALMA) of radio antennas in Chile and the NASA Hubble Space Telescope.

The team was unable to determine whether they could associate the newly discovered X-ray emission with the PSO167-13 quasar or companion galaxy. This because of their close separation and the weakness of the X-ray source.

Some of the information and data from the NASA.gov website